General view of the three units that make up may early war Cuban Army. Units of liberated slaves are on either flank with Cespedes -leader of the rebellion - and a small group of plantation owners armed with miscellaneous weapons in the centre.

Above are two more views of the same early war units with the original Cuban flag. I believe that the genuine article from 1868 is now in the Museum of Havana.

Shown here are later war units of infantry and a mountain gun which can be added to the other units to strengthen them. Below are two more views which also show the final version of the Cuban flag and the one in use today:

Cuban cavalry deployed in line and preparing for their famous machete charge.
Two general views of my Cuban cavalry units: 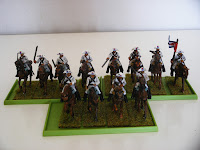 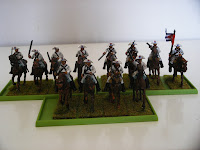 The current state of my completed Cuban Army is:
3 Regiments of infantry for the early years of the war (9 plantation owners, two units each of 10 liberated slaves)
1 Regiment of 17 troops for the later years of the war
2 Regiments each of 6 cavalry
1 Mountain gun and crew.
I plan to add another regiment of six cavalry and the Cubans will also be able to call upon the gunrunning ship Anna and her crew when the models are finished!
﻿
﻿
﻿