Cuban Army for the Ten Years War in Cuba

The mainstay of my Cuban army are also figures from the Perry Miniatures American Civil War range, particularly the Confederate infantry. The main problem I had was depicting a very rough and ready force as it appeared at the start of the war, and then a more professional looking body as the war
progressed. Also there were going to be difficulties showing soldiers on one hand and liberated slaves on the other. Clearly my Cuban forces would require more than the simple paint job that provided my Spanish forces. Three of my Mambi soldiers with the Cuban flag as it appeared at the start of the rebellion; they are Perry Miniatures American Civil War Confederates with some simple conversion work.  I sliced off or filed the top of head to get a nice flat surface to which I could glue a disc of paper or plastic card. Then, on the centre of the disc I stuck a new crown in place; this was made from scrap plastic, filler or even by using a trimmed down cap from the box of  Perry stuff. Some of the figures have machetes made from a strip of plastic card. Finally they were undercoated, the hats suitably crushed and then painted up. 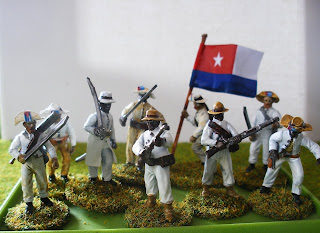 I think that it is always difficult to represent irregular forces but I am quite pleased with the result I have achieved here. Some of them are armed only with machetes or swords, a couple have pistols, one has a rifle, one has a rifle chopped down to represent a shotgun and the standard bearer has a double barrelled shotgun slung across his back. 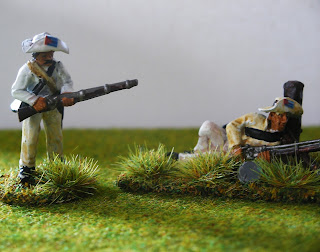 Two more Mambi soldiers. The one on the left is a conversion from a Perry  figure  as described, the one on the right is a presentation figure given when you buy the ACW rules supplement from Warlord Games.

Another Mambi soldier in close up. The insignia on the hat is the Cuban flag that was eventually adopted and is still used today.  I found a suitable image on the internet, copied it into a graphics programme, reduced it, repeated it many times and then printed out a whole sheet of them. 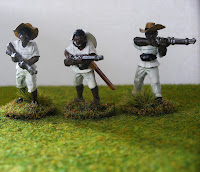 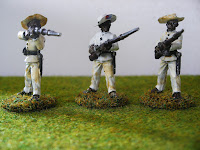 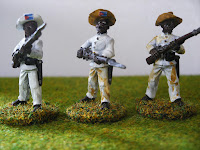 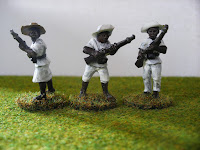 I had quite a search to find figures that  I could use for  liberated slaves; I eventually settled on these Copplestone Castings available from North Star. They are Zanzibaris and I was attracted to them since they have bare feet and clear negro features.

My interest in this particular war was first sparked when I saw the painting of a Cuban machete charge that I used at head of my post labelled the Ten Years War. Which of course meant that I had to have Cuban cavalry. Perry Miniatures came to the rescue again with their American Civil War cavalry although they needed a little conversion work. First I removed the scabbard and sword hilt, replacing them with a machete case made from plastic card. Heads were treated the same way as the infantry and provided with a suitable hat. 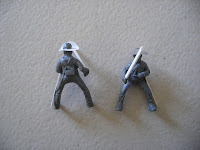 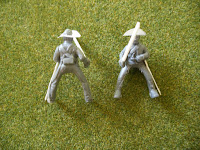 In the picture on the left you can see the conversion work on an unpainted figure; on the right is the same figure after a coat of primer.﻿ 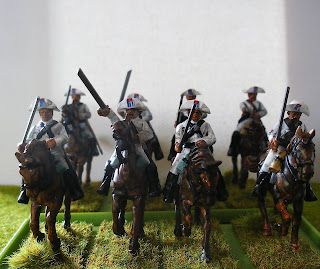 And here the finished regiment, exactly as I envisaged them and ready to charge like those in the painting!﻿ 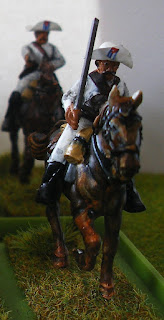 A close up view of one of my Mambi cavalry ready to join in a machete charge against their Spanish adversaries.﻿

Although the Cuban Army was basically an insurgent army they did have some artillery; either smuggled in from the USA, supplied by various juntas and sympathises, or captured from defeated Spanish units. Particularly favoured were mountain guns and I decided to make one to beef up my fledgling force. 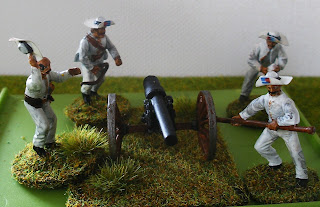 It is made from Perry ACW artillery parts; the trail was built direct from the box, then a section was taken out of the middle and the two pieces glued together thus reducing the overall length of the trail. The barrel was taken straight from the box but was thickened for the last third of its length by winding tape round. The wheels came from my box of 20mm bits as the ones from the Perry set were far too big for this type of gun. The final piece was based and painted before being provided with a crew. You can see above that the commander is delighted at scoring a hit and has thrown his hat into the air!
﻿
﻿ 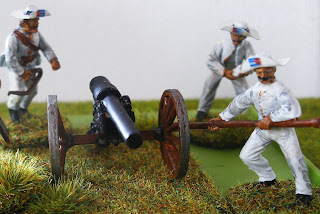 As mountain guns were generally transported by mules I made a second gun and deconstructed it into several loads to add to the packs on a number of mules.﻿ 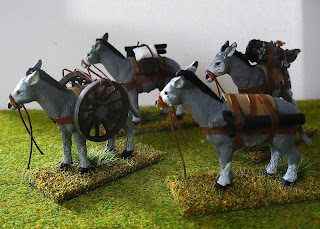 The mules came from a range of toy animals for zoos and farms; harnesses were made from plastic card and tape. I have a second set of four mules and may eventually get round to modelling them without the gun for times when the gun is in action, but for the moment I am more than pleased with the result.﻿