First of all, how to make the jungle? As I had already decided that the best scale for the model figures would be 28mm and I would therefore set about building jungle terrain to suit. Although I had made quite a lot of terrain in the past (for my son who was interested in Warhammer) I had never made a jungle or anything remotely like it. Luckily I found lots of useful stuff on the internet but I have to give special thanks to Major Thomas Foolery for the invaluable advice contained on his blog: http://majorthomasfoolery.blogspot.co.uk and I pinched a lot of his ideas.

I wanted the terrain to be very flexible and decided to build it on small stands which could be rearranged as needed. A visit to Hobbycraft furnished me with small plywood discs which were ideal: 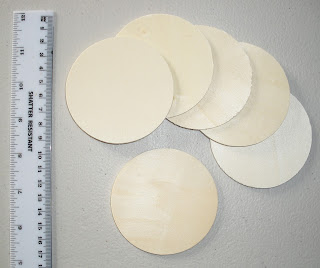 These particular ones came in packs of six and cost £1-80. I also bought a couple of others types, some at six and a half inches in diameter, some three and a half inches square, and a few rectangular ones measuring three by two inches. They were all sprayed with matt black, coated with pva glue and green scatter or flock, and then left to dry.

When the stands were ready for further work I assembled all of my raw materials: 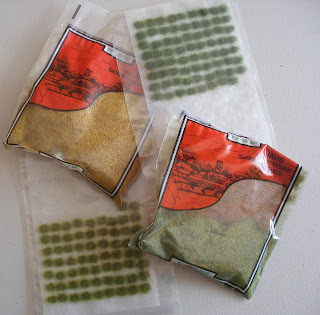 Different grades and colours of scatter material and sheets of self-adhesive grass tufts also in different colours, all easily available from the local model shop. (Probably the best model shop in Greater Manchester for military related items, and the one I use regularly is F and S Scale Models in Audenshaw.) 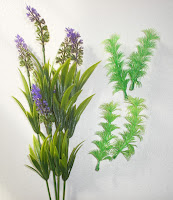 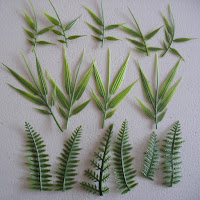 I obtained a variety of plastic leaves and foliage from a large local garden centre; much of the greenery came from the floristry section and other odd items were found in the pet, reptile and aquarium areas. (If you live in the North West then you cannot do better than visit Gordon Rigg Garden Centre which is where I obtained most of these materials from.) 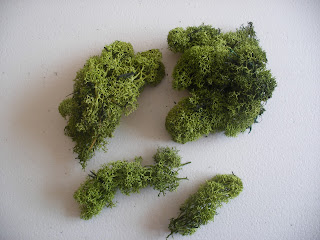 Reindeer moss or lichen I am sure you are familiar with, but instead of buying it form the model shop I bought a huge bag of the stuff from a floristry shop for just £2-00!﻿ 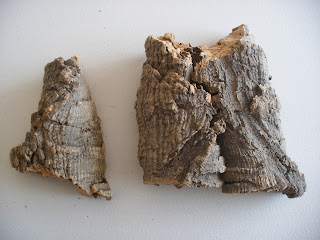 Cork came from the reptile section of our extremely useful garden centre. As well as the large chunks shown here they also had sections of bark in branch form; I bought one branch for £3-50 and used it to make the four large stands of tree trunks that you will see a little later. 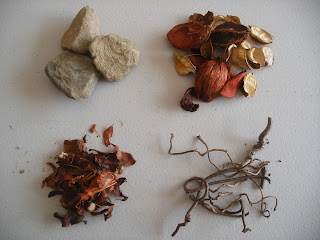 I collected together a few suitable rocks and stones form the garden along with appropriately gnarled twigs. On the top right of this photograph is a handful of pot pourri which contained a number of interesting leaves and pods, on the bottom left is the same stuff which has been crunched up.

That's it! Everything that I would need was spread out on the table ready to be assembled. I plugged in and switched on the hot glue gun then set to work.

First of all I worked on the small wooden discs which had already been coated with green scatter material. I simply dabbed blobs of hot glue onto the surface and quickly stuck leaves, moss, twigs etc. in place in an entirely random fashion. I will not bore you with pictures of all of the stands (I made about thirty!) but here is a photograph of two of them just to give you the general idea: 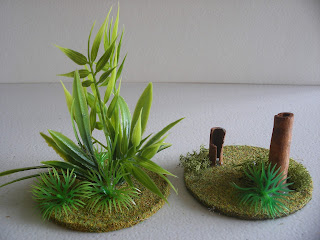 The larger bases were used to make huge tree trunks such as you might find in a rainforest; I have only modelled the lower part of these tress as I wanted to be able to get in amongst the foliage to place model figures for my wargame. The pieces of cork branch were glued in place first and were then festooned with string that had been soaked in pva to represent creepers. If the sawn edges of the cork could be seen I toned them down with a little paint before adding random foliage, leaves etc. to the rest of the base: 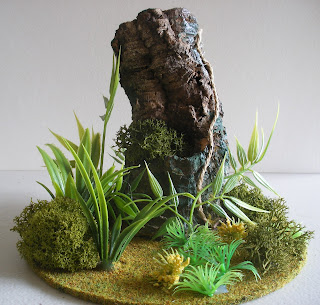 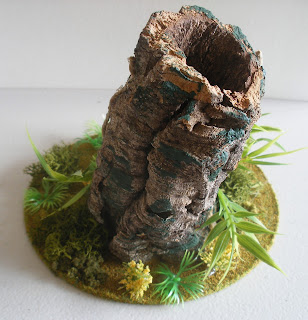 Palm trees were added to some of the bases and when I ran out of the shop-bought wooden ones I made a few more by laminating pieces of cardboard together with pva. I then treated them exactly the same as the wooden ones and added my trees: 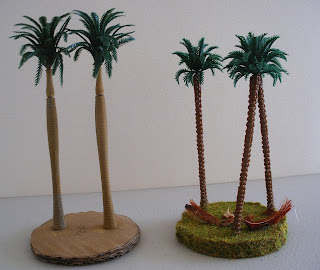 Bamboo I used was of two types, some of it was shop bought and simply added to the prepared square bases: 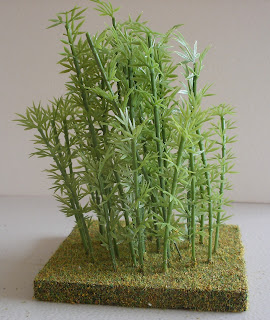 But I also made some stands of bamboo myself. When I was on holiday in Madeira I visited the botanical gardens and was surprised to see that some species of bamboo would grow to thirty or forty feet in height and would also be so dense as to be impenetrable. To make something similar I drilled lots of holes in some of my square bases; into them I glued skewers that had been painted green and then covered with rings drawn in felt tipped pen. On the top of each skewer I then used superglue to attach suitable foliage: 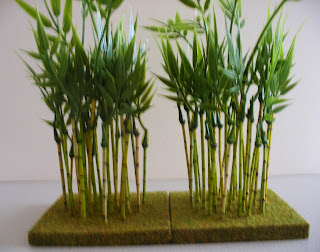 These stands of bamboo were the final element of my basic jungle which you can see in some detail in the page headed Completed Jungle Terrain for my Ten Years War in Cuba Project.

I still wanted to add more terrain in the form of swamp, rivers, fields of crops, roads or paths and buildings and I will cover each of these in further posts.