Buildings and Crops for my Ten Years War in Cuba Project

Once my jungle was complete it was time to add a few buildings and fields to represent the plantations and agricultural settlements around which much of the war was to revolve. First of all I made a couple of shacks which would have housed slaves and agricultural labourers: 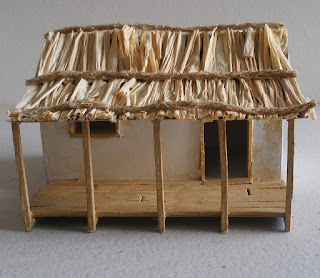 Here is a close up of one of the shacks, you can see them both in views of the completed jungle. Made from foam board to a very simple design with card and coffee stirrers. The roof was made from card and covered with pva glue and raffia.

I also built a small jungle hut; it can either be used as part of the main settlement or set off deep in the jungle as a base for some of the Cuban insurgents: 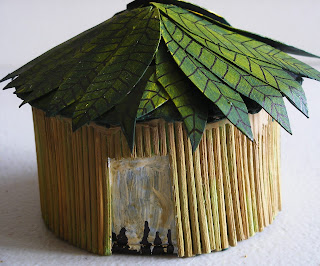 Again I used a very simple construction method, in this case everything was based on an empty Pringles tube! I cut the tube down to size, covered it with pva glue and lengths of skewers held in place with elastic bands until the glue dried. A simple card roof was added and to this I glued palm leaf shaped pieces of painted card; detailing was finished with a black felt tipped pen.

The agricultural economy was crucial to Spain and in efforts to protect this source of wealth the armed forces constructed many blockhouses - later on in the was a whole line of them was constructed (the Trocha) cutting the island into two and isolating the rebels at the Eastern end. 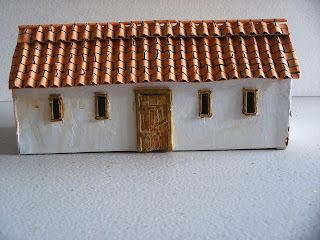 I used foam board again with coffee stirrers for the door and lining the loopholes. The roof was made with corrugated card glued into place, painted and detailed with a felt tipped pen as before. 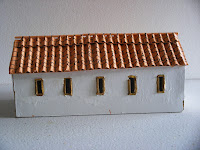 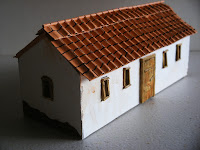 That completed my initial settlement though I plan to add more as the project progresses; ideally I would like another couple of huts, a church and perhaps a more substantial plantation owners house. It would also be interesting to build a mill and boiling house since these were vital buildings on any plantation, but that's in the future.  When I eventually get round to building them I will feature them here but for the moment the next thing I needed was fields or crops.

Sugar cane was crucial to the Cuban economy and was a source of great wealth for the Spanish Government, so a field of the stuff was next on my list: 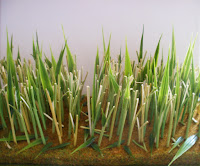 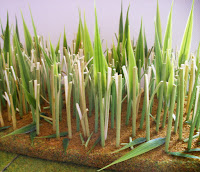 I made it by drilling rather a lot of holes in a piece of wood ! Into these I glued pieces of skewer which I had painted and partially split at one end; then, very painstakingly I glued leaves into the split ends. Not strictly botanically accurate but good enough for my purposes and good enough to restrict the passage of troops just like the real thing.

Various bits and pieces of greenery that I had left from making the jungle were glued to another base to make a small field of mixed crops. This was an essential part of any plantation since the crops were used to feed the slaves and other workers: 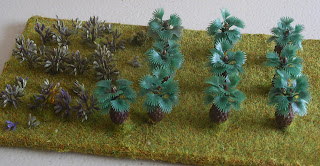 A final addition, and essential for the diets of the agricultural population, were plantains or bananas to you and I. Another base board was drilled and then filled with suitable looking bits and pieces from my jungle raw materials. Once the glue was dry I had the fiddly job of painting the appropriate parts bright yellow to represent my bananas: 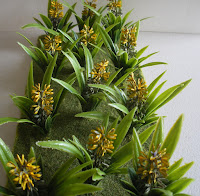 ﻿
﻿
﻿
Again they may not be entirely correct from a botanist's point of view.....but hey! Making model bananas is not something that I do every day.
﻿