Making an Archaeological Dig for my Sudan Wargame

When I decided to use my diminutive British colonial army and a horde of dervishes for a Black Powder skirmish I was at a loss for a different and unusual scenario that I could use. I didn’t want to play just another colonial game in the Sudan and inspiration struck when I watched a televised documentary about the Rosetta Stone. The chequered history of the stone as it was discovered, captured and taken away suggested to me the unusual idea of using an archaeological dig as the centerpiece of a small encounter and I set to work. The idea of including in a wargame an area that actually went “under ground level” intrigued me and once I had cracked the problem it certainly produced a unique-looking example of terrain. So, how did I do it? 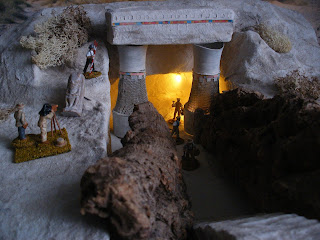 My table is six foot by four foot in size, but it is actually made up from two tables each of which is six foot by two foot. By setting these two tables apart slightly - about six inches apart - I was able to slot between them a box six inches by eighteen inches in size. The box was extended on the longer edges to give a flap which rested on the table top and supported it in place; the remaining six-inch gaps on either side of the box were then covered with cardboard sheets before the whole surface was given a desert makeover with a suitable cloth, reindeer moss, sand and so on. 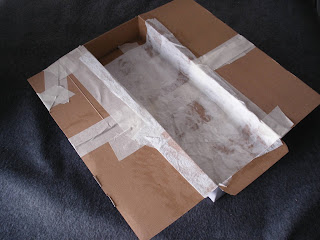 The basic box construction with flaps to either side

The actual dig was constructed inside this box and was textured with tissue that had been soaked in p v a and sprinkled with sand before being painted a suitable desert sand colour. I decided to alter one end of the box by making it higher so that the “dig” appeared to go under a rise in the ground. This was done easily enough by adding a chunk of florists’ oasis and fixing it in place with tissue and p v a again; if you prefer you could use polystyrene or indeed any other material that takes your fancy as it will eventually be covered and painted to blend in with the rest of the terrain. 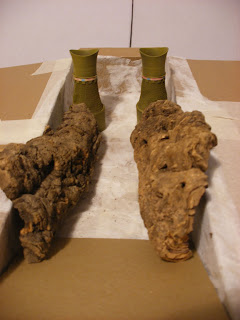 Checking everything for size and look before contuning with the build 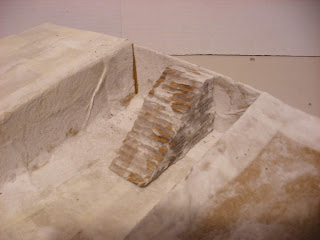 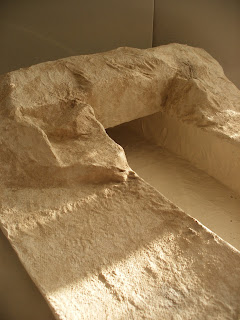 The lotus-shaped pillars are actually small glass or acrylic bottles from the Airwick Pure air freshener range. To give them a little texture they were sheathed in a net thread cover for sewing spools; this is a fine white mesh which is elasticated and can easily be sourced on eBay. If you cannot find this product then a useful alternative can be found in the fine, plastic mesh bags used to package onions and some other vegetables and fruit. When the mesh was fixed in place I seated the whole thing in a section of cardboard tube and tidied up the exposed lower edge of the mesh by wrapping and gluing thick thread in place. Finally, I added a strip of serrated paper to the top; this was actually “made” by ripping a sheet of paper from my sketch pad and then cutting and straightening the torn edge – a technique that I have used many times. When all of the adhesive had dried I spray painted the two pillars and added dry-brushed weathering. A last touch was to fix in place a thin strip of coloured paper that I copied from Egyptian motifs found on the internet and then printed off. 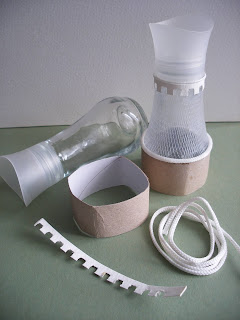 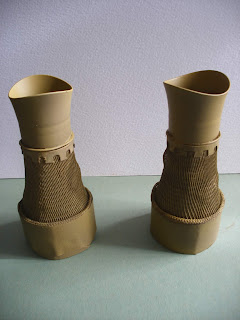 Thelintel placed across these two lotus pillars was simply a piece of expanded polystyrene; it had been wrapped in kitchen roll and sealed with p v a glue again before being painted. It was then enhanced with another strip of serrated-edged paper and a last piece of the Egyptian motif that I had already used on the pillars. The stairway was easily made from strips of card glued together and then given the p v a and tissue paper treatment to give them texture and seal them. The rock faces leading down into the tomb are just chunks of cork bark but you could use pieces of bogwood, or polystyrene slabs suitably textured and painted. 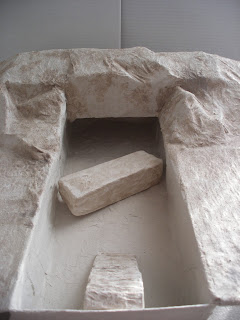 All of the components textured and painted 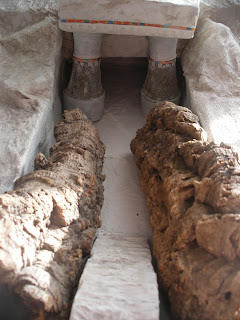 I decided to try and use lighting in a couple of the photographs that I planned; in order to do this a couple of holes were made in the box and l e d bulbs from a short string were threaded through. The final detailing of the whole thing came with the addition of a couple of Egyptian statues from Ainsty Castings and various pots and jugs from Iron Gate Scenery. 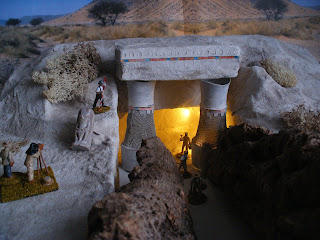 Final effect with lights and archaeologists!

The dig is set within the confines of a small settlement of four scratch built buildings with a well and a couple of stands of palm trees. The British encampment consists of bell tents from the Perry range and a zariba made from twigs suitably based and flocked. Other scenic elements are reindeer moss along with chunks of cork bark and bogwood as already mentioned and a scenic backdrop. The backdrop was made by printing off a suitable picture from the internet, enlarging it on a photocopier, making multiple copies - some of which were mirror images - and joining them together.