Several members of the Mailed Fist wargames club that I am a member of are interested in doing early WW2; The Fall of France with the BEF and all of that. Since no one had been collecting French forces that lot fell to me! Building a French Army has been extremely interesting and I am not complaining about my role, but it has been almost impossible to find suitable trucks in this scale. The problem eventually brought me to try a simple conversion of other models and I thought I would share my idea on here.

I bought a pack of Flames of War Russian Zis-5 three ton trucks which contains two vehicles. The code number on the pack if you want to buy the same for yourself is SU422. The models are one-piece resin castings which I needed cleaned up as there was a tiny amount of flash here and there: 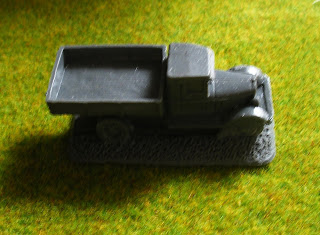 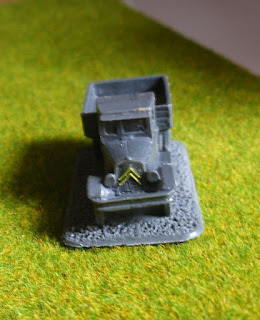 What I did was to cut a length of nylon filament from a kitchen brush then carefully fold it into a "vee" shape. This was trimmed to size and glued in place before I added a second one to get the Citroen look that I was after. The model was then sprayed with matt green and left to dry: 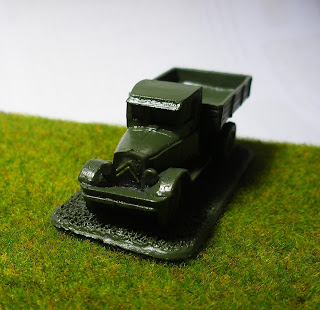 Happy with the result I then went on to tidy up the paintwork and highlight the distinctive "vee" with a touch of silver. Finally I added some sand wash for weathering and added flock to the base: 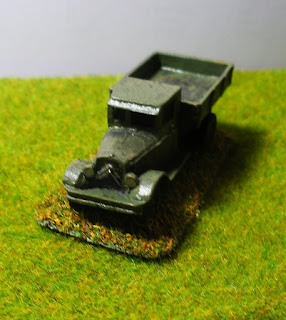 The finished model; whilst it is not 100% accurate - particularly the uneven split on the windscreen - I think that it is a fairly passable representation and one that I am happy with:﻿ 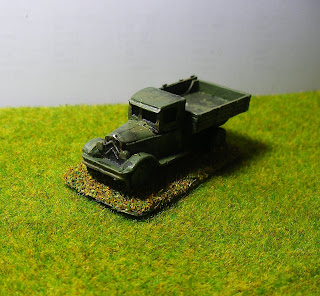 I already need more transport and I have decided to give this same treatment to one of the Flames of War Japanese Isuzu one and a half ton trucks; the pack number is JP 430 if you wish to look at the basic model for yourself. You might also consider giving the same treatment to the Italian 6 ton Lancia truck which is pack number IT440.
Posted by Glenn Clarke at 12:40