Three or four weeks after starting on my project I now have a fairly impressive jungle: 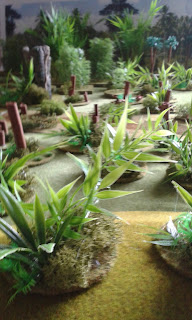 General view of the newly completed jungle. I have used fairly small bases of either 3 or 6 inches in diameter so that the stands can easily be rearranged to give an infinite variety of layouts. 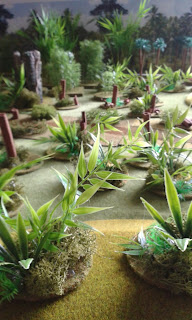 Another general view which also shows part of the backdrop picture. I still need to expand the backdrop and also add a view with more sky. 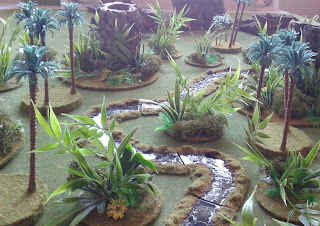 A general view of the stream snaking across one side of the table, and a close up of the same area. 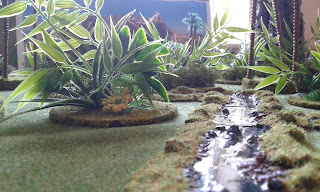 As the Ten Years War progressed the Spanish Army began to fortify important areas and also established blockhouses to protect plantations and mills, consequently a number of buildings and fields of crops were also required: 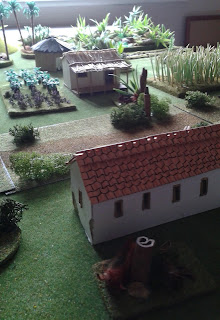 The more civilised end of my jungle! A Spanish blockhouse in the foreground with a field of sugar cane to the right and a cultivated field and cottage to the left, with a second closer view. 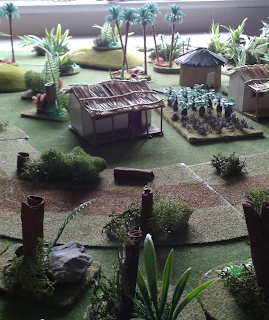 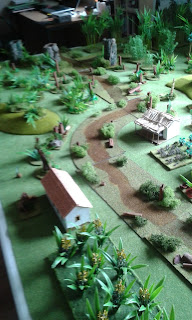 A higher angled view of the whole setup with a road snaking through the settlement and my crop of banana plants in the foreground! 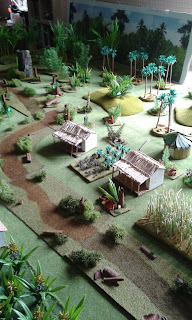 A second high angle view of the whole table so far with my half finished jungle backdrop to the rear.